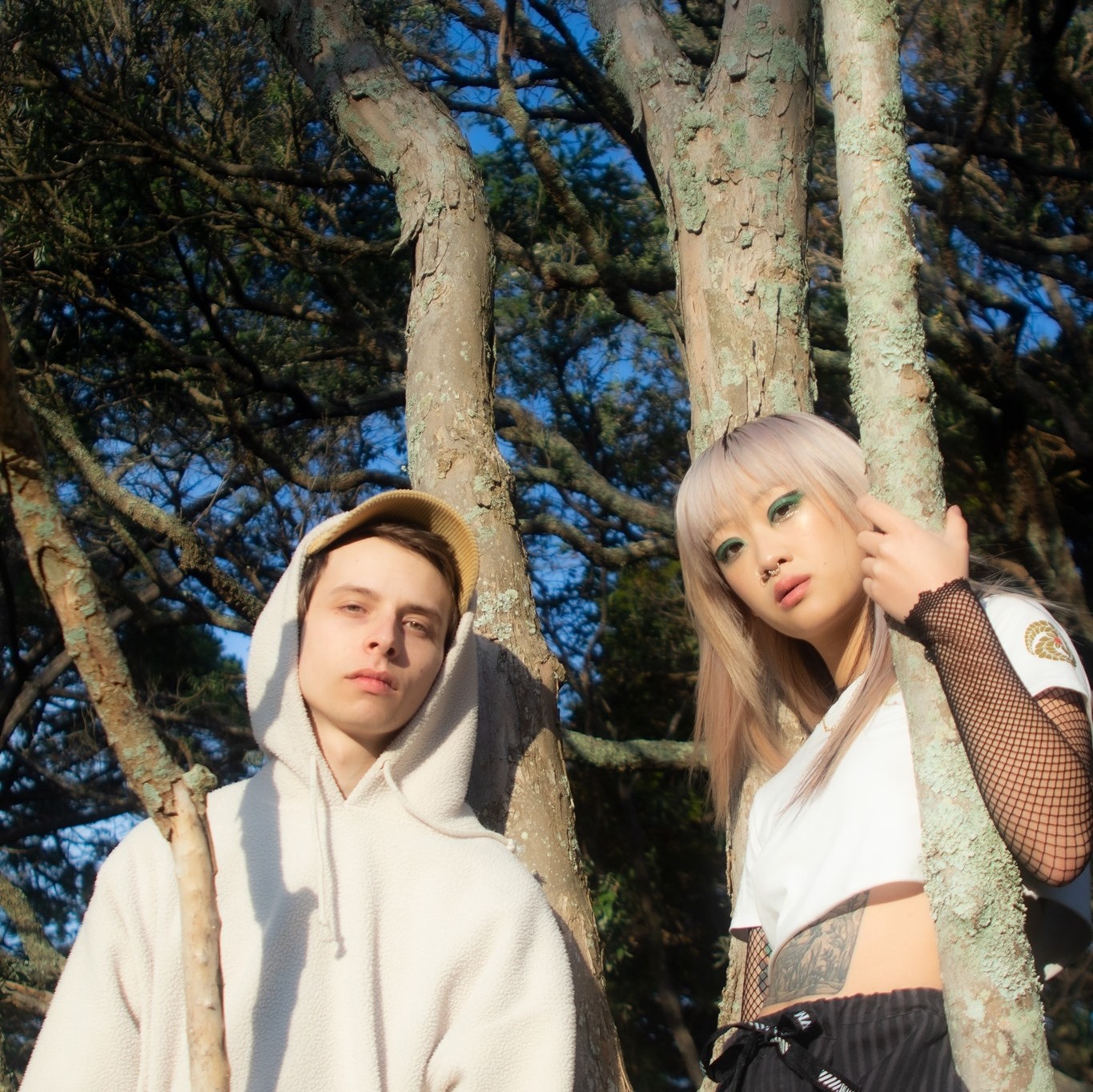 We are both from Auckland, NZ.

Yery: My Dad loves listening to music that brings him nostalgia; when I was really little, the lullabies he would sing to me were mostly old cartoon theme songs and ad jingles. He played a lot of the Carpenters and ABBA. Then I listened to a lot of K-pop until the fateful day my friends introduced My Chemical Romance to me, which really got me into discovering more music on my own through the internet. Discovering womxn like ABRA, Bjork, Mitski, FKA twigs and Kali Uchis has been one of my biggest inspirations. Seeing the way they honour their divine selves in their artistry gives me the confidence to expose myself and my thoughts in our writing and expression.

Carl: My Dad is a singer and has played in plenty of bands, so from a young age I was always around music. My older brother and I listened to a ton of 90s and 2000s hip-hop growing up, which sparked my interest in production when I was around 13. I also started playing bass guitar around the same time.

Yery: I remember I always had the classic teen dream of being in a band but was always too self-conscious to actually do music until my last year of High School, thanks to a lot of encouragement and validation from friends. I was in an all-girl band and our main goal that year was to enter Smokefreerockquest. We weren’t the best at our instruments and changed names many times. We didn't make it past the first round and also fucked up our song on stage. I remember watching all the other (mainly white, mainly male) bands playing and feeling this desire to ascend that community. I think it was 2014 that we entered, and on the North Shore lol. I don’t remember much about it now. Did we really play Rockquest or was it a fever dream?

We’re both based in Central Auckland now.

Yery: My beautiful and ambitious immigrant Mum put me onto piano lessons as soon as I could walk, but I was real mediocre at it. She also got me into playing the clarinet up till I quit when I was about 14. I actually had a lot of fun playing in concert band. I miss that feeling of playing in a big group and feeling in sync with all the different sections and players. I only quit playing because I lost my clarinet and felt so guilty because it was expensive and my Mum spent ages paying it off.

Since that, I haven't really studied music. I took a music production class at Uni but skipped too many classes and failed it, sorry Mum. Everything I know now I credit to Carl being super patient and always making time to explain production things to me. And also to Youtube tutorials on FL Studio. I think theory helps a lot but I don't think it’s a necessity; I’ve learned so much about songwriting by just doing it and picking apart songs I love. Sometimes you spend months on a song and realize you don't really like it, but learn so many valuable things in the process.

Carl: I never thought I would end up pursuing music at the end of my schooling. I didn't study music at high school, but by the end of year 13 I had a really strong interest in music production and mixing, which led me to take a one year Audio Engineering course at MAINZ.

In terms of special moments in my musical journey so far, I think as a young musician in NZ you always look up to other kiwis that are doing great things in the music industry. It was really special to us when we started to see our name up on gig posters alongside amazing acts that we had always looked up to such as Randa, Bailey Wiley, JessB, Church & AP, Haz Beats, the list goes on. We were also really lucky to be able to work with some amazing audio engineers during our journey, such as Ben Lawson and Josh Fountain. Working in the studio with these local legends was such an inspiring and educational experience. Just being in the studio and thinking about the amount of history that has been made in this room, the amount of incredible music these guys have helped to create, it's really special.

Yery: I think being asked to play Laneway festival will always be a special memory for me; it was our first festival gig and we were so excited! That crowd was dope, we saw so many friends at the front of the stage and the love that was circulating that day has fuelled me for LIFE. That exchange of joy is so special and important.

Also the process of making our first EP, Vacasian, will always be very cherished. We did the whole thing with so much help from our friend Carlos, after hours at the Auckland Uni studios. It was my first time in a studio like that and it was so fun. We really churned it out

‍Yery: It’s different with each track, but most times Carl will show me a beat he’s made and we go from there. We’ll freestyle with melodies, then write to it (either write on the spot or I dig up something from my writing archives and mould it to the song), then we will structure and craft it.

Carl: It varies! I'm always making beats, (it's kind of like my stress relief/happy place) so I'll usually just compile a folder of ideas and loops that I have made, then I'll send it to Yery on Dropbox. I do like to produce as we go - context is everything, and getting the timbre and mix feeling good as we're writing the song, is important for us. We'll catch up and go over the beats, identify our favourites, and then brainstorm ideas. Anything from songwriting, structure, mood, rhythm, timbre. From there, Yery and I will usually work on our parts individually - Yery writing vocal parts for the song and me working on the production. After that we'll get together to record some demo vocal takes, then sit on the track for a while, coming back to it to make minor adjustments as we see fit. Once we're happy with the song, we export the stems and jump into the studio for a vocal recording and mixing session!

Yery: I think we both just know. It's mutual.

Carl: Great question. I feel like this is almost instinctual. We're always making songs and trying things out, but sometimes you just make something that hits 'the' feeling. Honestly I don't know how else to describe it. Like we'll record a quick demo for a song, and if it feels good, we'll keep working at it, until it feels GREAT. Those are the songs that we end up releasing. The songs that we would add to our own personal Spotify playlist. The songs that deliver on the vision that we had for it. Songs that would be a shame if we never shared with people!

‍Yery: One thing is to not compare our journey to anyone else's. Everybody moves differently and it's all valid. Success is what you make of it, and to me it is joy and fulfillment. And also being able to survive off the money we make from music (cheers capitalism).

But at the same time, it’s about knowing your worth and knowing what you deserve. I think we can be too nice and humble sometimes - it's important to be proud and give yourself the credit you deserve. That’s not about ego or external perceptions of you. The work you make is a reflection of you and how you feel about yourself. You gotta shed that self-consciousness - it is not the same as self-awareness and it definitely is not a kindness to yourself. Feeling like an alien? Fly the spaceship.

Some of the best advice I’ve received is on what to do when feeling hopeless and defeated in anger and the way things are. I met Albert Wendt when I was working the writers fest and he told me to write it out. I wish I could’ve given that more energy rather than trying to take it out and understand it in other ways.

‍Carl: I think a big one for us is learning to say "No". From the start, Yery and I decided that we were going to pursue every opportunity that we could to grow Imugi. Playing shows for free, releasing our music for free, it helped us to grow our brand and make connections. But it got to the point where we felt like we were prioritising exposure over artistic integrity. We've both suffered from imposter syndrome, so it's really important to remind ourselves that our art has value - that we are good at what we do and we deserve the recognition that we receive.