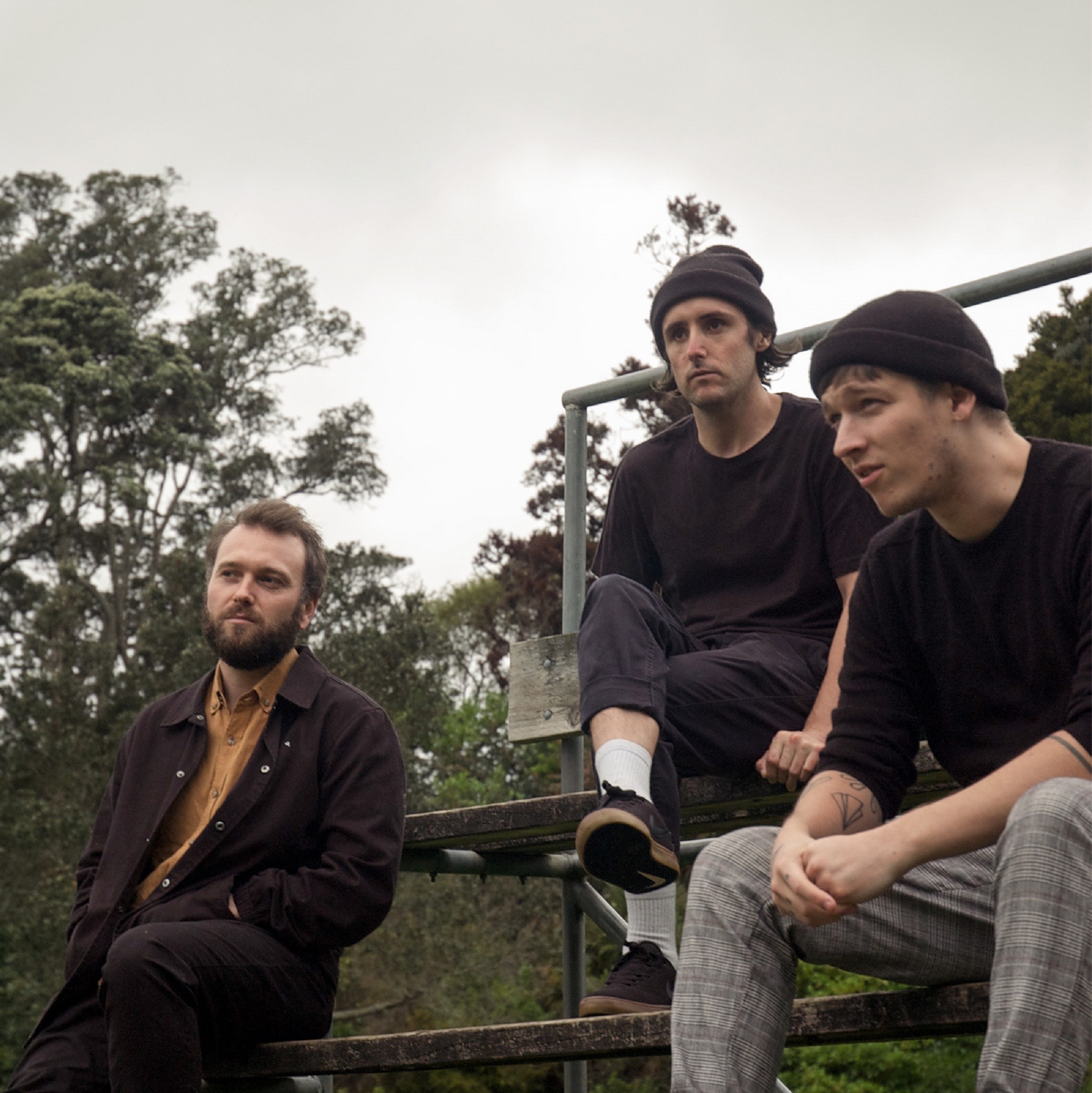 I grew up in Timaru, South Canterbury.

My earliest memory of music in our house was waking up hearing the radio in the next room but I can’t recall exactly what was playing. That radio had a built-in microphone and when I started my first band we used it to record our jams. There’s a whole history of my friends and I repurposing PC microphones to make home demos. That was the height of the boyband/girlband era so that machine would have gotten a workout with Robbie Williams, 5ive, Nsync and Spice Girls tapes.

My older brother and sister both joined our school's brass band, so naturally I followed in their footsteps and joined when I was old enough. All of my friends joined at the same time and I think the next year we took the show on the road, touring the entire North Island to promote our album ‘Primary Brass’. It’s crazy to think about it now, a bunch of 10 to 14 year olds playing up to 3 shows a day, but to us it was just super exciting. The network of people involved with the brass band at the time were all very encouraging and really made me feel like I could continue with music in the future.

My brother's CD collection was super influential as I started to find rock and punk music in my early teens. NOFX, blink-182, Millencolin and Greenday were on repeat during long drives. Once we could copy CDs and eventually share our i-tunes library it really opened up my own personal taste.

Smokefreerockquest was a big deal for the little music community at Timaru Boys High. I participated in every Smokefreerockquest I could from 2006 to 2009. It was the highlight of my calendar and a lot of hard work went into writing songs throughout the entire year. Timaru Boys had some high quality bands at the time which kept everyone on their toes. My band Making Dave never left our regional finals but we picked up a few awards on the way and kept things interesting every year. I actually still play music with a lot of those people from those days and a lot of the other friends I made will re-emerge in their respective cities to help us out when we tour the country.

I studied audio engineering at MAINZ Christchurch through 2010 and 2011 (yes the earthquake years). I learned a lot of skills that I still use today but looking back I think I was still too young minded to be out in the world and it really burned out my passion for music. My creative energy never went away but there were definitely a few years where I was travelling a wayward path.

I think it is really important to take a break and explore who you are outside of your goals. The biggest shift in myself happened around this time and I grew up a lot. When I started drumming again I was looking at it from a different perspective and felt like I had more purpose and freedom. I re-discovered New Zealand music around this time, everyday I was tuning in to Kiwi FM and keeping my eyes glued to local blogs.

After attending a number of shows at the local venue I reached out to my good friend Kieran to start our band Spawts. After about 6 months of weekly jams we put together our best songs, asked around for someone to record them and the Spawts EP was born. It would take us another 6 months to release the record as our friends from Two Cartoons offered us the chance to join them in moving to Auckland. While we waited to move we put the live band together, jumped on a few opening slots at darkroom, put the EP out then packed up the van and slid into Tāmaki Makaurau.

The Auckland music landscape has changed a lot since I arrived. I made a bunch of lovely friends early on and they are still the people I feel most at ease with. I would go see their bands every weekend around Karangahape Road, it really felt like a real moment in time. Before long those acts either graduated to bigger tours/shows or people moved cities. There isn't just one thing going on in Auckland though, all across the city there are little pockets of creatives making all types of art and as an outsider it can seem quite daunting to step into these communities. Everyone has been very welcoming though, I’ve ended up making friends with a few different groups of musicians and usually the things we do together or have in common have nothing to do with the music we make. Presenting yourself as just the ‘musician’ or as just one type of person can burn you out. I had a weird idea that I had to do that in order to be accepted, only to realise I'm over in the corner with my drum sticks while everyone else is just hanging out talking about Nintendo.

In terms of the rest of the country I would say Wellington has been a particularly great spot for me (us), every single person just seems to want to get involved in any way they can, whether you’re playing a DIY house party or a local venue they are just very enthusiastic and loving. People you feel you can reach out to whenever you know?

A lot of the special moments in my journey so far have been the little things. For example getting played on RDU for the first time, playing a live session at bFM or getting a video premier on my favourite blog. I think RDU cut Happy Monster to a 7” at some point which is buzzy (If you have it please contact me).

My first New Zealand tour with Two Cartoons was a highlight moment for me. I was plucked out of a factory to tour the country. I learned a lot on that tour, just watching how it was all put together and I still use it as the backbone to any tours I run today. ‍

What is your songwriting process? What do you write your songs about?‍

I have only recently started writing lyrics for my band. I have always kept notes on my phone and made contributions over the years but the latest release ‘Clicks & Whistles’ was the first time I have taken on the sole responsibility.

I’ve always taken notes on my phone's notepad or in a notebook, they are full of absolute nonsense that has pricked my ears but then the odd line will stick out and I can work from that. It clicked in place for me when I started writing about what was happening around me. Just little observations taken from interactions with other people. It’s really hard to explain without getting too personal, these days I want the song to be left open for interpretation. I’ve dabbled with going specific in the past which served a purpose at the time but it lost its meaning as I moved on. I find it really hard to write about situations that I've already lived through, sometimes I can't even recognise that person and it can be quite tough trying to get back into those shoes. Before I start writing I always start with reading. It helps me to get words and structure floating around my head. A lot of memories come to the surface as I read, like little bubbles that I can write down or maybe return to if they linger long enough.

When I'm writing my drum parts I like to jam with the band first until I get a good understanding of what is going on. In a perfect world I will then dedicate as much time as I can to recording myself playing the full song or just a section of the song so when I listen back I can pull out all the parts I think work and comp it together. I’ll then dial that version into my brain or even chart it out as best I can before recording it. It goes without saying that I have a mountain of voice memo recordings on my phone of little beats I’ve worked on in the practice room. Most of those never get used unfortunately but every now and then I’ll load them up like a little photograph of where I was at during that time.

When Spawts write songs we always start with the music. Our process has been different for every release, we’re always trying to refine the way we do things. Early on we would record our jams on pro tools then listen back and pick out the best ideas which would become our demos. We naturally moved to more of an in the box approach where Kieran would come up with an idea or even a fully fleshed out demo before we tried it together. Then some songs we tested live for years before we put them down. Same goes with the recording of the songs, We’ve recorded together live for a handful of songs but also tracked everything individually on other releases. It just comes down to how we feel at that time and what we have available.

When it comes to choosing which songs to release we really just go with our gut. Which song fits within radio guidelines? Which song is hooky? What’s the purpose of this single release? Is this song a good representation of the overall project? Have we put a song out that sounds like this before? These are all questions that float around when we are deciding.

Let me just leave you with this - one of our biggest charting bnet singles has almost slipped past the Spotify algorithm entirely, while one of our most streamed songs has never been played on the radio. Good luck out there!