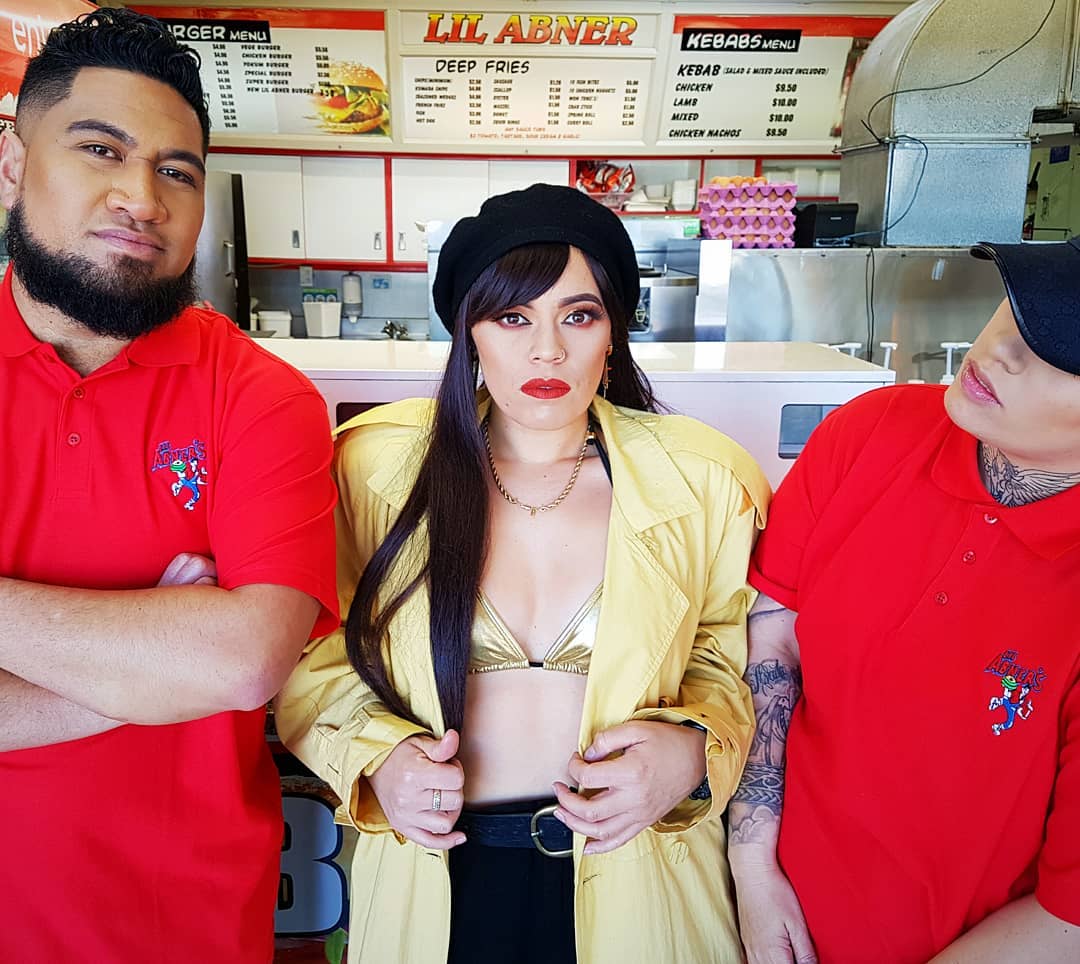 Omer: Kia Ora! We are both from Papatoetoe in Auckland. There was a little bit of music around while I was growing up. I remember all the uncles and aunties knew how to play the guitar, and we'd have family meetings every week or so and sing all our family songs, which I use to love as a child. I thought it was the most beautiful thing to listen to.

Rebel: There was music around for me too. I grew up in the church which was pentecostal, and then there was also my mum who was a rocker (woooww!).

Omer: We entered Pasifika Beats when we were in High School! And we won the Auckland regionals for that. We made it to the finals in Wellington which was probably one of the coolest times we had doing music in high school. I think it paved the dream for some of us.

Rebel: And we're both still in Auckland now! Still in Papatoetoe.

Omer: After high school we both went to Radio School, then I ended up getting my Bachelors Degree in Communications at AUT. It was weird because after Radio School Reb and I had a hiatus in our friendship and we didn't speak for about 7 years! So imagine going from being best mates to just dropping her off home one day and then never seeing her again for 7 years. No argument, no fight... just a weird moment. I tried to do music on my own with other people but it wasn't working out at all. Ended up in some dodgy situations purely because I was young and I didn't know a lot about what this world was like. So half way through University I actually gave up on the music dream and quit in my heart and my mind. Until Reb and I reunited coincidentally again 7 years later!

Rebel: After radio school with Omer I went on to work at the New Zealand Rockshop and surrounded myself with musical friends while Omer and I were living two seperate lives. And like she said, we came back together 7 weird years later and started doing music together again!

Since then we've done some cool things that we had only dreamed about really. We've opened for people like Safia, we've played at Splore twice - the second year we were asked to come back to their main stage which was pretty amazing. Played at Big Gay Out a few times! We've toured the country before and wanted to tour again this year but the Corona has kinda put a halt on that!

Omer: We've been featured on RNZ, Musician Magazine, played on radio for Niu FM and Mai FM, lots of cool features on music blogs, Maori Television and Marae.. it's all quite a lot to keep track of!

Rebel: For me, my special moment has got to be performing Closer live for the first time which was at Cassette Nine. When we were playing it, I looked up and saw a lot of people holding their hearts and really feeling that moment. And after the show a lot of people messaged me and came up and said that song meant a lot to them and they were in love with it. Which is what we want people to feel with that song.

Omer: I feel like touring NZ was pretty special. First time touring, first experience of that. Learned a lot. We bonded together even more than before. I personally became aware of what I'm like as a singer in terms of what touring routines I started to realise that I needed in order to give my best on stage. We saw some of the most beautiful places in NZ that we wouldn't have otherwise seen! Stayed in some cool houses like a church which became our Airbnb! So yeah, touring was the coolest experience.

Rebel: We write about whatever the hot topic is in our life at the moment to be honest, what we are feeling, what's going on.. circumstance based! All of our songs are written from our own personal experiences.

I thought I had a template, but I don't! It changes a lot. I thought it was easier to write lyrics then put music to it or vice versa. I’ve also written using guitar first then lyrics. Sometimes I make a beat first, then matching lyrics to that! I have found though that if it's from the guitar or piano it feels more heart-felt. And sometimes a beat feels a bit more upbeat and fun. Sometimes writing lyrics first is more like instant inspiration.

Omer: When choosing a song, we usually demo up our songs first and then have a listen to them to see which ones we are feeling. We think about the last couple of tracks we've released and we think about where we want to be heading in the future in terms of sound and where we want to take our audience. Then we'll pick a song that suits.

We probably don't look at going into a studio until the song is completely finished really! Production, lyrics, BV's - all of this is usually completed and ready to go and that's purely because studio time costs dollars! And we have to spend wisely. We would love to write in a studio from scratch but at the moment we just have to be smart with our money and studio time. So when the song is ready, we head straight in and we know what we're doing. We get that done and then if there's any last minute inspiration that we get, we'll book in a final studio session to play with ideas. A good balance of having your song ready to go but leaving room for inspiration is always nice.

Rebel: First thing for me... don't have any regrets! Go with your instincts. Don't listen to the tyrant in your head! My second one would be never be scared of your ideas!

Omer: If you want to do something, commit all the way - just go for it without giving any fucks about what others are gonna say or think. Second would be to seize the moment. Seize every opportunity. You don't wanna regret not doing something you wish you had.